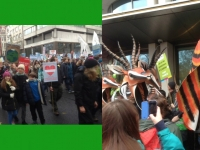 How can we help to sustain legitimate and constructive hope, in the face of either delusional expectations or resignation and despair.

This is a core and evolving CPA theme expressed most recently in Radical Hope event in Bristol April 2015. It is a difficult balance, in the face of difficult truths.

The sheer density of November’s news challenges any effort to summarise. Still looming large is the horror of the Paris attacks, with varying opinions as to their impact on focus and determination at COP 21. Amongst the TV clips on Sunday of climate marches around the world, the lines of shoes in Paris in lieu of marchers had a silent eloquence. Tensions abound, but also some unifying links. The man whose wife died in the Paris killings and who said that he refused to give the terrorists his hatred was voicing an age-old spiritual and psychological truth about resisting the pull of barbarity and vengeance. We too are on the edge of a “war”, a polarisation of responses to the climate crisis, in which sanity and compassion as well as truth can so easily become casualties.

The collision of principles over the old model of fossil-fuel economics is closely inter-woven with national and international politics. In the case of coal, China is changing course whereas India’s position is more ambiguous. Conflict is currently nowhere more apparent than in the Philippines. It is no coincidence that the pressures for “development” there and the impacts of climate change are both intense.

At the four-way interface of investigative journalism, law, mainstream economics and popular pressure, the exposure of Exxon’s cover-up of its own historical findings and moves in the USA to bring them to book for their crimes of omission and commission present an atrocious, hopeful and intriguing scenario. Given the view that it will be more difficult to establish cause and effect than was the case with tobacco, Polly Higgins’ refrain “The Earth Needs a Good Lawyer” has never seemed more apt.

At the start of the month, competition for headlines between trivia and devastating environmental news produced the usual winner, as Monbiot commented in the case of the Indonesian fires. This was also the case with those in Siberia.

The current UK government seems to be in a state of collective disavowal. Despite its professed commitment to action on climate change and welcome moves away from coal, its treatment of the renewables industry and abandonment of measures to promote energy efficiency and decarbonisation almost beggar belief. This Bloomberg article on what economists don’t get may help to explain such a depressing situation. Naomi Klein’s emphasis on the unfortunate timing of the need for climate-driven regulation while free market ideology still holds sway is also pertinent. Several commentators have suggested that, even in the more geologically and demographically favourable USA, fracking for shale fuel is a giant Ponzi scheme, one that has seduced governments and investors with the allure of fossil fuel autonomy. Back with the UK press, that radical bastion the Financial Times carried a front page headline on 28th November: “Cameron under fire for green cuts”. The article featured a letter from Vodafone, Nestle, Unilever, Panasonic, British Telecom and Marks & Spencer, castigating the government for its policy inconsistency, with damaging consequences for infrastructure investment and competition in the rapidly expanding global low-carbon sector.

Some tensions may amount to little more than a field day for the press. We must all judge for ourselves when a company is making serious moves to clean up its act, as opposed to applying a coat of greenwash. Which view do you take about HSBC’s and Credit Agricole’s participation in the first project of the Green Climate Fund?

The good news of Statoil following Shell in withdrawing from Alaska is heartening. It may be primarily about oil prices and Opec’s game plan, but could nevertheless prove to have been a step away from the brink. Johan Rockstrom is better qualified than most to provide a science-based overview as is his judgement that we are right now at a tipping point. His phrase “A big world on a small planet” is powerful. There are multiple tipping points in human engagement, just as for planetary systems. So many revolve around questions of cost and timescale. Thomas Picketty raises his head above the parapet again in suggesting that the time has come for a substantial tax on luxury flights. It’s easier to see the logical sense of this than to visualise its success as a measure in the bear pit of popular economics. And one of the problems with tipping points is that the planetary ones may be outstripping our capacity to adjust our ways. If the film “Cowspiracy” is to be believed, transport emissions pale into insignificance compared with the planetary impacts of the global food industry. A disturbing strand in the film is that almost no environmental organisations are fighting this cause, not just because of the grip of the vested interests involved, but because our identity is so wrapped up in what we eat.

It is fitting to end back at Paris. Naomi Klein joins forces with Jason Box in arguing that a climate conference is a peace conference.

But to continue, CPA needs your membership!

If you are not yet a member, but find CPA and the newsletter relevant to your interests, please do join. Members pay just £24 per year and in return receive advance notification and reduced fees at events, plus a right to vote at our AGM. Above all, we hope that it provides the satisfaction of belonging to a network of people who are keen to apply the resources of psychology and the psychological therapies to addressing the climate crisis.

Adrian Tait
(On behalf of the Exec. Committee)

PS. As this newsletter was about to go out, we noticed a renewed critique from leading climate scientist Kevin Anderson about pressures to “normalise” and toe a politically expedient line, on what is likely to constitute effective mitigation. This tallies with the warnings, over several years, from CPA member David Wasdell. We intend to give more space to this issue in the near future.