As part of her Resonance & Climate Series, Sarah Peyton is offering this online talk with CPA's Sally Weintrobe which will take place on Tues 24th Jan 5 - 6.30pm UK time. 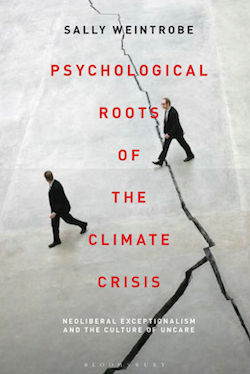 Sally Weintrobe, psychoanalyst and author, will discuss issues she presents in her book, Psychological Roots of the Climate Crisis, which tells the story of a fundamental fight between a caring and an uncaring imagination.

Her book helps us to recognise the uncaring imagination in politics, in culture — and also in ourselves.

Sally Weintrobe argues that achieving the shift to greater care requires us to stop colluding with the rigid psychological mindset largely responsible for the climate crisis.

People in this mindset believe that they are entitled to have the lion’s share and that they can ‘rearrange’ reality with magical omnipotent thinking whenever reality limits these felt entitlements.

She will share her experience as a psychoanalyst, from her professional life that has been dedicated to helping people to face difficult truths.

Sally is a psychoanalyst who writes and talks on how to understand what underlies our widespread disavowal of climate crisis.

She edited and contributed to Engaging with Climate Change: Psychoanalytic and Interdisciplinary Perspectives (2012).

Her current work is on the “culture of uncare,” a culture that she argues works to sever our felt caring links with the environment and with each other.

She most recently authored the book Psychological roots of the Climate Crisis: Neoliberal Exceptionalism and the Culture of Uncare (2021).

Sally is a Fellow of the British Psychoanalytical Society (BPAS), an original member of the Climate Psychology Alliance (CPA) and Chair of the International Psychoanalytic Association’s Climate Committee.