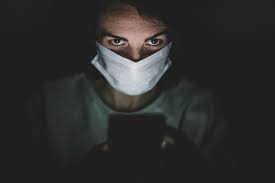 Covid-19 and the Climate and Ecological Emergency (CEE)

Outbreak
“We should let no crisis go to waste” said Rahm Emmanuel (1).

In the context of the Covid-19 pandemic, this could apply in one of two diametrically opposite ways. Either it is an opportunity for disaster capitalism, as described so graphically in Naomi Klein’s The Shock Doctrine, or it is a learning opportunity for humankind to reflect on and draw back from its destructive and self-destructive rampage across planet Earth.

At the time of writing (early April 2020) attention is mainly and necessarily focussed on coping with the pandemic – limiting fatalities, “flattening the curve” to prevent overwhelm of health services, informing and instructing the public. As Rosemary Randall, co-founder of Carbon Conversations and founder member of The Climate Psychology Alliance comments it is too soon to draw any conclusions about how responses to the pandemic will be connected with, or will influence attitudes to, the CEE. There is however already a torrent of commentary on the subject, with wide-ranging views on what will emerge from this crisis.

What appears certain is that the novel coronavirus is zoonotic, involving horseshoe bats and an intermediate species - probably pangolin, also that human infection started in a Wuhan “wet market”. As Charlotte Du Cann of Dark Mountain observes at least 60% of new diseases in humans are zoonotic. Others put the figure closer to 70%. John Vidal in The Guardian echoes much of the recent commentary with his sub-headline: “Increased contact with animals (is the) likely cause of outbreaks such as Covid-19, say experts, as conservationists call for global ban on wildlife markets.” The reasoning seems irrefutable, but would enforcement be any more effective than against elephant poaching in Africa or illegal logging in the Amazon? If the bush meat trade is driven underground, it’s easy to imagine that hygiene will be even poorer than in the wet markets.

As the Ecohealth Alliance points out any chance of an effective response depends on recognition of several inter-connected or compounding issues: the global wildlife trade (worth billions) agricultural intensification, deforestation and urbanisation bringing people closer to animals. Reining in these practices would be a colossal challenge. Any chance of doing so depends on recognition not only that there are many viruses out there, potentially even more devastating than Covid-19, but that the practices in question are increasing the likelihood of viral spillovers.

Science writer David Quammen, interviewed for Emergence Magazine, points out that our relentless penetration into wildlife habitats is “pulling viruses towards ourselves” (6). Quammen, in this quietly powerful conversation, refers to humankind itself as an “outbreak species”. He reminds us that human numbers have quadrupled in a century and quotes authoritative voices which point out that outbreak populations always crash. We restrain our impact on the Earth (impact = population x consumption) or matters will be taken out of our hands. The fact that the coronavirus has no consciousness doesn’t make the pandemic any less of a warning.

Another take-away from the interview is that it was discovered in 2015 that a new coronavirus existed and the findings were written up in 2017. Scientists warned of the danger that it posed and advised precautionary measures, including taking the genome in order to produce test kits. The scientific advice went unheeded. Sounds familiar? Others, including Bill Gates, had warned that it was only a matter of time before a pandemic hit the world and criticised the miniscule allocation of resources to preparing for it.

Lockdown – a Range of Consequences
What is being revealed during the extensive lockdown? Widely observed is the dramatic drop in GHG emissions and air pollution, also a marked improvement in water clarity in various locations. This has of course come at vast human and economic cost. But the psychological question here is whether the unplanned improvement in environmental conditions will add persuasive strength to long-standing arguments that the so-called “externalised” costs of fossil-fuelled human activity have long since become intolerable. In other words, this taste of a cleaner world, however traumatic the context, might spur efforts towards radically less damaging ways of life, economically and socially.

So what signs can we read on the shape of the longer-term response? Here we have to navigate the contradictions mentioned above and, as psychologists, to be aware of the hopes and biases which might influence our reading, causing us to downplay the ambiguity and conflicting trends.

A chilling example of Shock Doctrine opportunism was the news, related by Bill McKibben, “Big oil is using the coronavirus pandemic to push through the Keystone XL pipeline.” (7) This occurs against a backdrop of a US Administration pursuing a relentless agenda of reversing environmental safeguards and criminalising protest. The new twist, described by McKibben, involves the exploitation by fossil fuel interests of the current ban on assemblies.

Against this and in the same week came the news that Netherlands capital Amsterdam has committed to a post-Covid recovery plan based on one of the most promising models of sustainable economics to emerge this century. The model in question is Kate Raworth’s Doughnut Economics, which integrates the right of all of humanity to have its basic needs met with the principle of planetary boundaries (as developed by the Stockholm Resilience Centre).

These reports starkly illustrate how the values battle which will largely determine our future is being conducted during the pandemic. And even amongst experts in the field who are committed to climate action the scenarios envisaged still vary considerably. Carbon Brief has assembled a collection of scientific and academic opinions: Coronavirus – what could lifestyle changes mean for tackling climate change?

These are highly qualified commentators and it must be hoped that a coherent vision emerges, perhaps following Amsterdam’s example in adopting Kate Raworth’s model. This initiative demonstrates that, in a favourable political climate, and one in which economic interests are also on board with decarbonisation and ecological awareness, an Earth that is no longer being degraded by human activity can still just about be imagined. But success on a global scale will depend on public rejection of populist – free market fundamentalism in the USA, South America, parts of Europe and Australia. Economic development in Asia and Africa will also need to diverge from the 20th century model of the global North. In addition, hypocrisy and disavowal in Canada, the UK and many other countries will also have to be effectively challenged. This is a tall order to put it mildly. Whilst it may be a conceivable outcome, the immense shock administered by the current pandemic merely opens the possibility that we humans will become more aware of our precariousness, take the trouble to understand the reasons and act accordingly. If there is indeed a powerful driver in that direction, it may come from the clear warnings that our neglect of ecological realities will, if it continues, spawn further pandemics – possibly even more lethal ones than Covid-19.

Going Deeper Beneath the Surface – A Psycho-Social Perspective
Vital as the above scientific, economic, political and ethical viewpoints on the Coronavirus-CEE interface are, the field of Climate Psychology has further resources to offer, in the struggle to understand our underlying predicament.

Climate Psychology in less than a decade since its inception as a new discipline has come up with new applications and perspectives on denial, hope, leadership, apocalyptic thinking, sacrifice, loss, grief and more. One particularly fruitful line of thought which it has promoted is in the notion of cultural complexes. The usefulness of this concept rests on its reference to both unconscious process and anthropocentrism. Very briefly, instances of cultural complex include:
*The consumerist paradigm of wellbeing;
*The culture of Un-care (Weintrobe);
*Tolerance of perverse systems in which great harm in the wider community is treated as an acceptable price to pay for personal, corporate or shareholder profit;
*The conflation of financial assets with success;
*Assumptions of entitlement and dominion;
*Notions of human separateness and superiority, as opposed to the deep dependence of humans on other life forms as well as recognition of the latter’s right to co-exist with us.

Cultural interpretation of the Covid-19 experience is key. Talk of being on a war footing and of “defeating the virus” or reasserting control, whilst understandable as a reaction to a devastating threat, miss a critically important point. Framing the pandemic as a hostile and alien invasion glosses over important facts. Viruses are aeons-old, highly resilient and widespread entities. From an ecological perspective, complex life forms have always coexisted with them, albeit in a perpetual struggle for dominance. Finally, and to re-emphasise an earlier point, they are the agency which has repeatedly brought breakout species under control. We are enhancing their potency with our invasiveness and hyper-connectedness.

This final point is no doubt repugnant to an anthropocentric mind set, or to any view based on our being somehow “above” other life. The cultural challenge posed by the pandemic is that it is homo sapiens which is out of control. Regaining control, if it is to be achieved in any tenable or stable way, has to begin with ourselves – with recognition that our impact (population x consumption) is well into breakout territory. It is not moralistic but straightforward systems thinking to conclude that climate disruption and the current pandemic are clear warning signals that we are destroying the conditions in which complex life can flourish on Earth.

Militaristic thinking, command and control measures, may be familiar and temporarily reassuring. They are even saving some lives in the short term. But they are also a diversion from the necessary analysis of where and how our species is exceeding absolute planetary boundaries.

There is a paradox at the heart of all this. As Clive Hamilton argues powerfully, our entry into the new geological epoch known as the Anthropocene recognises the fact that humankind has become an Earth system in its own right. We have fundamentally altered the atmosphere, cryosphere, lithosphere, hydrosphere and biosphere. Our power is massive. But we appear to be powerless to steer the process in a direction that will be healthy or beneficial for life on Earth, including our own.

Finally, this leads us back to an issue that is ethical as well as existential. At the level of human existence, it is those who are weakest and most vulnerable who are suffering most from the changes which we are instigating on our planet. Ultimately we are all in the same boat – fantasies of colonising Mars notwithstanding. But the ones suffering now are those who have no airy rooms or gardens to go out into during lockdown, those who have no welcoming new home when their land is drought-ridden or flooded, those huddled on the Mexican border, or in Greek refugee camps. Their voice is barely audible. And with no voice at all are the vanishing species, the dying oceans and rivers, the polluted atmosphere, the shrinking forests, the impoverished land.

So the big question is whether we will race to forget the vulnerability which the pandemic has exposed, cover ourselves in all the old false securities, or let it teach us that caring for those other-than-us is ultimately caring for ourselves.